MCQs on History of J&K Part 2

These questions have been compiled by JK Study Hub.Errors & Omissions excepted.

1. According to Mahabharata evidences, who ruled over the region during the epical times and had Republican System of Government? (Provided by JK Study Hub) 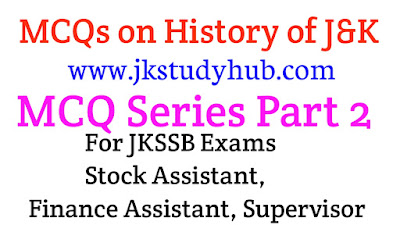 2. The first historian of Kashmir was?

(a) Kalhana (b) Lalitaditya

3. Which of the following is the earliest source of Kashmir?

4.The lower Karewas points to which age?

(d) None of the above

5. The earliest archeological site of India is?

6. Seeds of which crop has been found at Burzahom?

7.Which of the following are a few major invention of the Neolithic Era found in Kashmir?

8. The Neolithic Skull has been found at which place of Jammu and Kashmir, which reveals that people of that period knew about the surgical practice of human trepanation?

9.Pandrethan, the old city of Srinagar was

10.Which Mauryan ruler appointed a Buddhist missionary to spread Buddhism in Kashmir?