These questions have been compiled by JK Study Hub.Errors & Omissions excepted. 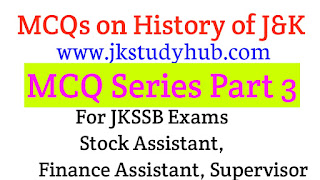 Click on Show Answer Button in sequence to see all questions.
Padma Awards 2022 for Competitive Exams
1. During whose rule Buddhism was introduced in Kashmir?
(a) Ashoka       (b) Kanishka
(c) Bashanas    (d) None of these

2.The Turushka kings, mentioned by Kalhana in his book was?

3. The city of Kanishkapura was built by?

4. Which ruler held the 4th Buddhist Council at Kundalvana in Kashmir that divided Buddhism into two sects?

5. The 4th Buddhist Council was held where in Kashmir?

6. Which invader from Central Asia conquered north India including Kashmir and Gandhar around 5th century?

7. According to Kalhana’s Rajatarangini, the first ruler of Kashmir was?

8. Which of the following king founded the Pravarasenpura City of Srinagar?

10. Which among the following was the founder of Karkota Dynasty?